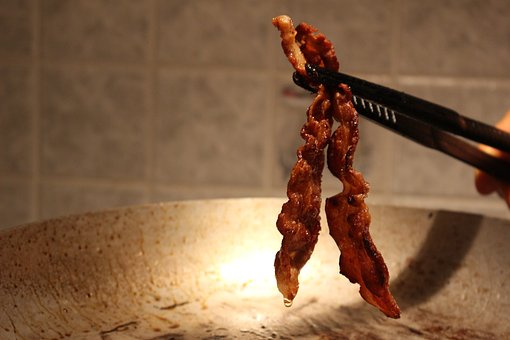 If you’re just piling your bacon into a pan with the flame on high, you are doing everything wrong. When people do cook it wrong they’re making two main mistakes. In case you have your flame set on high you’re going to get burnt and soggy bacon. If you put a lot of it in the pan, you’ll have bacon overlapping with only some of the bacon touching the pan. The bacon that’s touching the pan is getting burned, while the part not touching the pan is just becoming rancid and not cooking properly.

Now in the case that there is too little bacon in the pan, not enough fat will be left into the pan, which inevitably will scorch and burn it. This way you end up getting a couple of soggy, fatty, burnt pieces of meat.

Let’s start off doing this correctly from the beginning. First you want the stove set on low. Do not be in a hurry to get the bacon in and outside of the pan. You need to keep it in the pan for around twenty minutes. The next thing is to select a pan size so the quantity of bacon you are cooking covers the surface of the pan . A lot of people feel that you shouldn’t flip it until you are ten minutes into cooking it. That’s a big mistake. By continually turning over the strips, you’re seeing that it isn’t burning on the other side. The puddle that the meat is cooking in, is the magical and critical element in keeping it thoroughly cooked and really tasty! Remember here that you never pour off the grease while it’s cooking. Eventually it will begin to let off these small white bubbles of fat.

Keep the stove on a low heat, don’t cram too much bacon in the pan, flip it frequently, and remove the bacon when the tiny white bubbles start to appear.